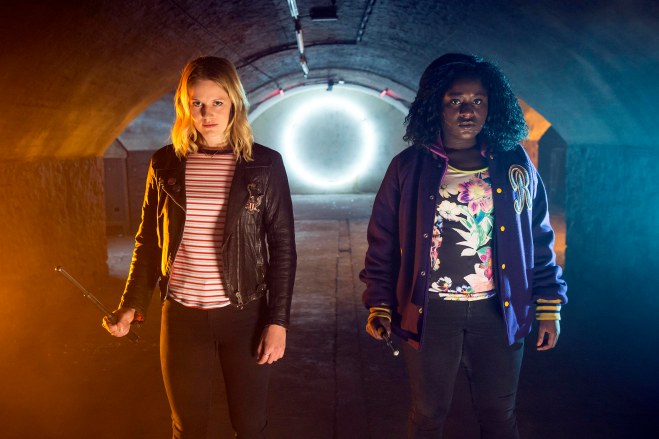 It’s almost impossible to not get a Buffy vibe when you’re watching Crazyhead. It’s a paranormal melodramedy with female demon hunters at the forefront. The parallels don’t stop there. There’s also a portal to hell that opens at a party, a boyfriend with a supernatural secret, and a bumbling boy lackey with an unrequited crush on the blonde heroine. Hell, the trailer even starts off with a title card that says “In every generation, there is a chosen one.” This isn’t to say that Crazyhead is a rip-off of Buffy but rather to illustrate just how much watching it feels like coming home for a Buffy fan.

Crazyhead follows two female protagonists: Amy (Cara Theobold) and Raquel (Susan Wokoma). Amy starts off the series plagued by hallucinations. Instead of normal faces, she sees some people as monsters. When she meets Raquel, a demon hunter, she learns that these aren’t hallucinations at all but rather a revelation that Amy has the ability to identify demons, who possess and disguise themselves as humans. Together they team up to exorcise, kill, and otherwise stick poles up the asses of the possessed in order to save the world.

Perhaps the strongest spiritual connection between this show and Buffy is its Girl (or Grrrl) Power philosophy. The show is very self-aware about gender and often speaks to it through Raquel. When a guy tells her she can’t go confront a demon because “it’s too dangerous,” she scoffs and brushes him off, pointing out that “having a dick doesn’t make you immune to danger.” These women fight evil on their own terms, using their own skills, and if the guys want to come along too, the more the merrier as long as they don’t try to pull any white knight bullshit.

Amy gets fired up with Girl Power too, at one point screaming empowerment into Raquel’s face, literally calling her “a strong independent woman” and evoking the power of Beyoncé.

Crazyhead is notably more adult than (at least early) Buffy, largely to the show’s benefit. In terms of violence, it isn’t gratuitously gorey but the grown-up language makes the show feel more authentic than basic cable constraints would ever allow. God knows what kinds of offensive things I would say if I was ever confronted by demons. It also allows for some potty humour (which I’ll freely admit to enjoying) and sexual content, which all come together to match the Buffy thesis of saving the world but having to navigate through the awkward challenges of modern life.

So the next time you go to start Buffy again, consider giving Crazyhead a try. At 6 episodes, you don’t have much to lose.

For more insights like this, subscribe to our podcast: The NetFlakes Podcast, available on Soundcloud, iTunes, or whichever podcast app you use.