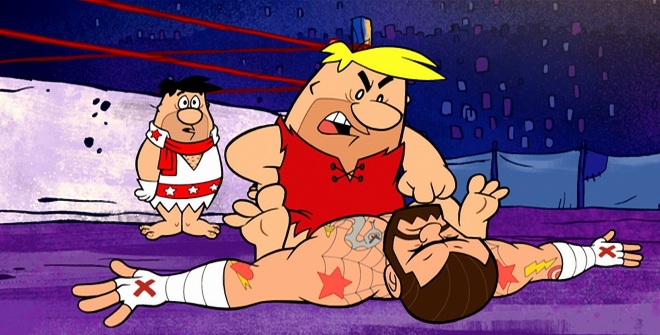 Stone Age Smackdown is tailor-made for a very specific demographic. If you happen to be 60 years old, while also being 8 years old AND a wrestling fan, then this is sure to be your absolute, all-time favourite movie. Otherwise, it’s essentially useless.

The movie takes place in a typical Flintstones setting, with Fred Flintstone getting himself into trouble at work before hatching a scheme, with best friend Barney Rubble, to put on a wrestling show in order to pay for a vacation for his family. On the way, the pair meet up with various new characters, based on and voiced by popular wrestlers from the WWE (World Wrestling Entertainment).

First off, why The Flintstones? There hasn’t been an original Flintstones production since 2001 and the characters were resurrected for this? Am I so far out of touch that I didn’t realize that kids are devouring Flintstones reruns on Netflix? Or was WWE Studios simply able to secure the rights to familiar characters on the cheap? I have to imagine that the latter option is the most likely, as the studio’s other recent offerings include Leprechaun: Origins and Larry the Cable Guy’s Jingle all the Way 2. This is to say nothing of the upcoming Surf’s Up 2: Wavemania.

Ignoring the possibly cynical reasons for why this pairing might exist, the question remains of how the Flintstones hold up for 21st century audiences. The unfortunate reality is that they yabba-dabba-don’t. The schlub-husband / hot-but-forgiving-to-a-fault wife dynamic isn’t one that anyone is clamoring to get back to. Sure, it may be authentic to these characters’ roots but this movie isn’t primarily for an audience ever watched The Flintstones. It’s a kids’ movie – which is to say it’s a kids’ movie filled with jokes about pay advances, driving in traffic, and gawking at your neighbour’s wife in a bikini. You know, relatable kid stuff.

So what about the wrestling parts? I don’t think that anyone was expecting much in the way of rich characters from stunt-cast wrestlers in a 51-minute cartoon. But even still, every time one of the WWE “Superstars” shows up on the screen, it feels like a cameo appearance on a TGIF sitcom. The ability to enjoy yourself is all but dependent on you feeling excitement that these familiar characters are on your screen as they shout stone-age versions of their catchphrases. But, unless you were watching WWE during a very particular time, there’s little to no other pay-off.

Making matters worse, the film’s main “villain” is CM Punk Rock, based on and voiced by Phil “CM Punk” Brooks. The voice-work was reported recorded in 2013, when Punk was among the promotion’s top villains. By the time Stone Age Smackdown was released in March 2015, Brooks had undergone an ugly, public separation from the WWE, including his retirement from wrestling and his announcement that he would begin training for his debut MMA fight for the UFC. Kids watching this movie found themselves served up a villainous cameo character they either a) hadn’t seen in a year and a half or b) had never seen before. So not only do you have to be a young child who is nostalgic for the 1960’s to get the full effect of this movie, you also have to have been a fan of wrestling for at least 18 months.

The most redeeming element of Stone Age Smackdown, surprisingly enough, is The Undertaker. For the uninitiated, The Undertaker has been a staple of the WWE since his debut in 1990. Despite his bizarre supernatural gimmick, he is about as revered and respected as a figure can be in the wrestling world. So it doesn’t seem that strange when The Undertaker (real name Mark Calaway) plays “The Undertaker” in Stone Age Smackdown, instead of getting a silly rock-based pun name like Marble Henry (Mark Henry), Rey Mysteriopal (Rey Mysterio), or the very lazy John Cenastone (John Cena). So imagine my surprise when this cartoon version of The Undertaker puts on pink tights, complains about a wedgie, and speaks ominously about the virtue of friendship. The deviation from The Undertaker’s normally dark and sinister character is delightful, bordering on shocking.

This one shining element aside, I really do have to imagine you have something better to do with your time than watch Stone Age Smackdown. Unless, of course, you happen to be that impossible person this movie was made for.