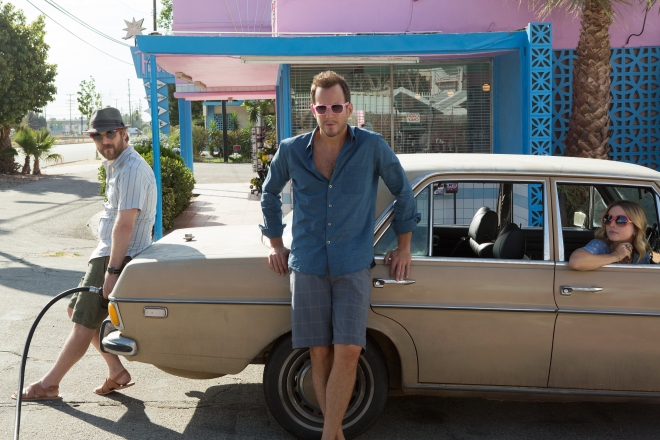 “You can’t always cut a deal when it comes to someone’s feelings.” – Mike Grasso (from Hold My Order, Terrible Dresser Episode 25)

Whether fairly or unfairly, I had to consciously stop comparing Flaked to other series. Flaked is not BoJack Horseman, although it is also about a middle aged man (or horseman), who is coasting through life while trying to encourage his small peer group to tell him that he is a good person despite all the evidence to the contrary. Flaked also isn’t Master of None – another Netflix original series written by the lead actor and a lesser-known co-creator that puts some of the star’s biography on the screen for the world to see. While Aziz Ansari shed light on the entertainment industry and race, Flaked gives creator/writer/star Will Arnett the chance to work through some of his own experiences, including alcoholism and divorce from a celebrity.

But as I said, despite the similarities, Flaked is neither of these shows. It’s its own thing and it has no chance to thrive if it’s living under the shadow of those other two fantastic series. So what is it? Netflix itself doesn’t seem too sure how to sell the series. It’s listed as a Comedy, a Drama, and a Dramedy.

The comedy isn’t particularly riotous. The jokes range from smile-and-nod cleverness to “did you really just make a joke about a lesbian being named Weiner?” The drama isn’t terribly high-stakes either. What Flaked is is an examination of human interaction.

Forgive a personal digression for a moment, but I promise I’ll bring this back. There was a manager at a job I used to work at who would always credit his and his team’s success to what he called “the emotional bank account.” His philosophy was that by spending time with his employees outside of work, engaging in their personal lives (depositing into the emotional bank account) he could, when needed, call upon them to go above and beyond for the sake of meeting their goals (withdrawing from the account). Logically, this makes sense. People are willing to do things for you if they like you and having a positive morale is great for teams to get the job done. What’s troubling is to hear somebody put it into such cold, financial terms. It’s not incorrect but it’s also not right. It’s a dehumanizing mentality that reduces people to quantifiable values.

As the series goes on, Chip (Will Arnett), the closest thing we have to a protagonist, is revealed to be a person who is seemingly devoid of sincerity. He doesn’t have interactions, he has transactions. Everything is a deposit a withdrawal. We’re exposed early on to the overt manipulation Chip is capable of. When his best friend, Dennis, is preparing for a date, Chip flutters around and within a minute has staged the rooms with props to make Dennis seem more interesting to his date. They then chuckle about how many tools of manipulation Chip has at his disposal.

The man is swimming in emotional currency. His smallest unit of currency is platitudes. This is the pocket change he dispenses freely as it has cost him nothing. Whether it’s in the Alcoholics Anonymous meetings he leads or in his romantic relationships, Chip is able to regurgitate an appropriate phrase for any given situation. It’s a great return on investment as it builds his capital as a spiritual and community leader with literally no expense.

A more crucial part of Chip’s emotional finances is his store. For years, he has been the proprietor of a stool store. At no point in the series, however, do we see Chip actually building a stool or engaging a customer in the purchase of furniture. Other characters joke about the absurdity of the store and Chip has no defence – because he doesn’t care about stools. He’s barely ever at the store. The most work we see him put into it is a vigorous sweeping after he’s been to the office of a young tech wunderkind with a fancy office.

So why does Chip care so much about holding onto the store? Why won’t he listen when his friends tell him it’s time to let go of this tomstoolery and find something new? It’s not about craftsmanship or the dream of turning the business into a furniture empire. It’s about the space. Chip has found a way to become the caretaker of not just an enormous storefront with a workshop but also an attached studio apartment, without having to front any of the money or risks involved.

Chip understands the value of space and is more than willing to increase other’s emotional debts by  making a show of sharing that space when it’s at its most valuable. When he’s in trouble with his not-quite-girlfriend, Kara, he buys his way out of it by letting her band rehearse at the store. When he needs to extend his stay on his not-quite-buddy, Cooler’s, couch, the store becomes the new home base of Cooler’s grassroots group SaVenice. It doesn’t cost Chip anything (he likely doesn’t pay rent or electricity) to let people use the space but doing so raises his stock incredibly.

Which brings us to another Chip currency: his reputation.  This is the one that has taken the most actual investment to earn. Through his false generosity of space and sharing of platitudes, combined with a willingness to spend his time helping people through their addictions, he has become a respected pillar of the community. Throughout the series, characters bow down to Chip as though he is the one holding all of this together. He gets free coffee from a place that charges $4.50 per cup. He eats for free at his favourite restaurant. Someone literally calls him the “King of Venice.” And these are just the passive perks. When Chip actually cashes in on some of his reputation, he can move mountains… or at least hotels.

Perhaps above all, Chip understands the value of “the truth.” Masterfully, he encourages those around him, in his AA meetings and among his peers, to share the truth whenever possible. He proclaims that honesty and openness are the keys to a healthy psyche, meanwhile he is amassing a hoard of truths, allowing him to hold power over others. Sometimes he exercises that power, through blackmail, other times it’s the invisibility of his knowledge that allows him to freely participate in the other aforementioned emotional transactions without people even knowing what they’ve giving him. He’s winning a game that most people don’t realize they’re playing. When he is at his most vulnerable – I suppose we could say when the “Chips are down” – is either when a transaction fails or when the finances are exposed.

Earlier in the series, Chip makes a decision that compromises one of his emotional investments. In his apology, he claims that he just really wanted to do something nice for the person but “things came up.” In this brief moment, he’s still dishonest but also completely exposed and the other character finally sees Chip’s game. “No,” she says, “you wanted the credit, and you lived off it before you did it, and then, you didn’t fucking do it, but you still bagged the credit.” Now, because she’s caught Chip skimming from the Monopoly bank, he has permanently lost that revenue stream. He doesn’t grieve the loss of a friendship but he now has to reconcile with a permanent tarnish to his reputation.

Possibly the most frustrating thing about the commodification of human interaction is that Chip really doesn’t know why he’s doing it. He has financed his way into a life of minimal effort – no rent at home, no rent for his store, free coffee, free food, but his skills are so sharp that he simply can’t stop himself from using them. It creates a cyclical, self-cannibalistic life where he is cashes in on one investment in order to save another, with nothing of intrinsic value ever entering into the equation. We see him use the store to add to his emotional cache but then turn around and spend it in order to hold onto his store. It’s an insane infinite loop with no end in sight.

The last image of the series (somewhat spoilery) is a sign that it may all be ready to come crashing down. Dennis finally gets the upper hand. After a decade of spending his own valuables truths the moment he realizes them, Dennis finally has information of value. He goes to Chip and begs him to be honest and vulnerable but Chip simply won’t allow himself to give up anything of value. At the end of the exchange, Dennis has an epiphany about the game that Chip is playing. 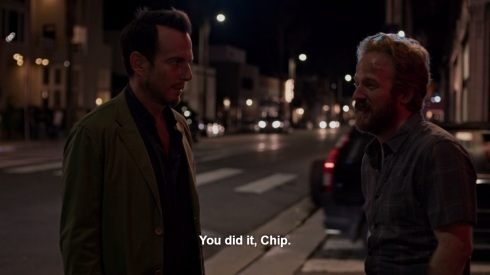 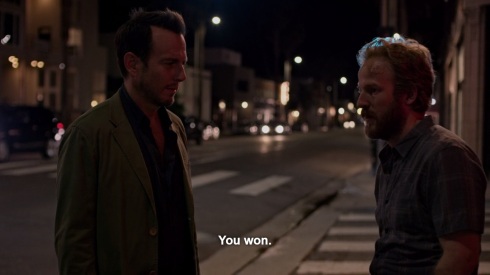 This is the moment where Chip has to realize that as great as he is at his gross game of emotional finance, there’s no game to win if there is no one left willing to play.

3 thoughts on “Flaked Review: A Story About a Bargaining Chip”