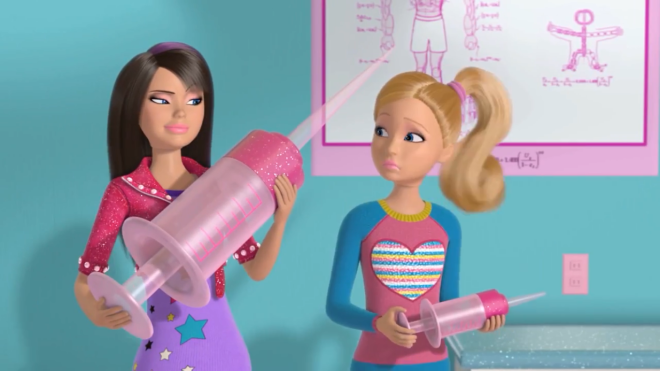 Hungover on New Year’s Day, watching cartoons with my best friend’s toddler. She picked Strawberry Shortcake’s Berry Bitty Adventures, a franchise I have no nostalgic connection to. I was never really into dolls, and Strawberry Shortcake’s ‘80s run was a bit before my time. I very quickly realized that the Strawberry Shortcake series is awful. The animation is bland. The writing is worse. The characters are boring and the only thing different between them is their hair colour and which berry they most strongly identify with, apparently. It wasn’t long before I wanted to gouge my eyes out and shove them into my ears, but my toddler companion didn’t seem to notice how asinine her program was. Fine.

After an episode of Strawberry Shortcake, my friend changed it to Barbie: Life in the Dreamhouse. At this point I was trying to figure out how I could feign sickness and leave altogether. My experience with Barbies as a kid mostly consisted of using Kleenex to design new clothes for them, and seeing 800 commercials for as many different Barbie products between Saturday morning cartoons. But it turns out that Mattel’s cartoon about dolls is actually watchable. It’s so watchable that I may have watched it alone, at my own home, no toddlers in sight. Maybe.

Here are some reasons why you could do worse than watching Barbie: Life in the Dreamhouse with a toddler pal (or not).

It breaks the fourth wall

I assumed that a show about Barbie would be gross because it would try to influence what kids demand from their parents. I realized two things: 1) every single children’s show does that; and 2) Barbie: Life in the Dreamhouse is aware of that, and satirizes it. Barbie’s house is constructed like the actual toy dream house, with counters that flip around to reveal absolutely anything the characters could need, and a pump for the shower (just like the real Barbie Dreamhouse toy). Barbie has every branded gadget under the sun, and in the episode about her birthday, her friends lament that there’s nothing they can get her because she has it all. Her friends and sisters tease her about having it all, but Barbie remains believably gracious and generous. Barbie is even consistently kind to her goth frenemy Raquelle, who is constantly trying to steal Barbie’s spotlight.

Barbie’s 150+ careers over her life come up over and over again, and Barbie frequently forgets that she’s been a professional everything-under-the-sun. In the birthday episode when they’re trying to figure out how old Barbie is, her friends explain that because she was president, she has to be over 35, and because she was a doctor, she has to have gone to university for 11+ years. They never learn her age, but in another episode, her black-and-white Pleasantville-esque bestie from back home in Wisconsin turns up (bringing a laughtrack with her that the sisters keep pointing out). She’s amazed that Barbie is a fully-articulated doll, because she can only bend at the waist. In fact, a lot of the humour comes from the fact that they’re actually plastic dolls. Which brings me to the next pro on the list…

The animation is very good

Because they’re not cheapening out on animation, the show derives a lot of its humour from wacky expressions and slapstick. A lot about this show reminds me of the humour in The Sims games, and the slapstick is a big part of that. Sometimes slapstick in cartoons is just a replacement for decent writing, but in Barbie: Life in the Dreamhouse, it just augments the humour. Unlike Strawberry Shortcake, the animation is so good that the expressive faces the dolls make really sell it.

There are a lot of for-the-grownups references

So far I’ve caught references to Star Wars, The Godfather, Indiana Jones, Jaws, Planet of the Apes, and even The Simpsons.

You went to the moon?!

Their vanity is part of the joke

This is where the satirical side of the show really shines. Barbie and her friends live in a fictional version of Malibu where everyone is a doll, and everyone is really self-absorbed and in love with fashion. Okay, so it’s not that fictional. And while Barbie and her friends are genuinely lovely people and good friends, the frenemy duo of Raquelle and Ryan represent the worst things you could say about Barbie culture, exaggerated for comedic and moralising effect.

The writing is excellent

There are lots of little one-liners like Raquelle’s “We get it. You like alliteration.” that poke fun at the Barbie franchise while being wittier than most kid’s shows. Not a bad way for a kid to learn about alliteration at all, in my opinion.

The good writing doesn’t just stop at clever one-liners, though. The characters are distinct and (dare I say) interesting. Barbie’s sisters have different personalities and looks, and often point out how ridiculous Barbie’s life is. Skipper is an edgy teenager (she has a subscription to Teen Angst magazine) and an inventor who loves technology. She also plays a video game Call of Fashion. She’s the foil to Barbie’s sometimes-cloying pink glitter optimism. Stacie’s a sporty X-Games-type who’s eagerly awaiting the arrival of her Little Miss Stuntman Starter Kit. Kelly – I mean, Chelsea – is the youngest, and she loves unicorns and baking (by putting ingredients into the oven and pressing the “ding” button). She also loves speed metal.

Even the pets each have different motivations and characteristics, and crack wise.

But he’s a super sweet and dedicated mimbo who is really good at building things like Barbie’s closet robot. He has a Barbie Sense that tingles whenever Barbie needs him to carry her bags or build her something (he even concludes, after attempting some of the different careers that Barbie successfully juggles, that being Barbie’s boyfriend is his full-time calling). His relationship with Barbie pretty much consists of him being her adoring and fawning biggest fan. And I’m fine with that.

Finally: He-Man made an appearance

Okay, he couldn’t talk or anything, but that’s not a huge loss, to be honest.

I’m not a parent and I’m not trying to tell you that this is highly-educational TV or anything like that. At the end of the day, this is still a show about a bunch of unrealistic-looking, vain, absurdly rich people aimed at children. With the announcement of the new more diverse-looking Barbies, hopefully some more diverse-looking characters will be introduced to the show as well. But I am saying that you could do worse than Barbie: Life in the Dreamhouse, especially if it’s in comparison to the mind-numbing bullshit Strawberry Shortcake is serving up.