When I first saw Black Books years ago, Bernard Black’s particular brand of acerbic misanthropy and pessimism won me over. I’m clearly not in the minority there; he is so relatable that gifs of his scathingly witty one-liners are ubiquitous and used by people who’ve never even heard of the show. The insufferable Bernard refuses to suffer fools – and he’s just hired one as his assistant. Manny Bianco (Italian for “white,” in case you missed it) is Bernard’s foil in every way: optimistic, sociable, cheery, and dim-witted. Bernard’s oldest friend, Fran Katzenjammer (an antiquated German word for “hangover”) seems to exist somewhere in the middle of the Black and Bianco spectrum. She’s just as nihilistic as Bernard at times, but she’s generally a friendlier, kinder person, like Manny. I fondly remember the fantastic script and the absurd gags (the kind you only seem to get from British TV), so when I saw that it arrived on Netflix Canada, I knew I had to revisit the bookshop.

And at only 18 24-minute episodes, the visit is an easy one to make. The humour held up wonderfully, and even the laugh track, which before had pierced my ears as if I was hungover, too, seemed to dissolve into the background. I laughed out loud over and over again, and felt that the way I related to Bernard’s nihilism (in a post-Rust Cohle and Bojack Horseman world, maybe?) had changed, too. I had less sympathy for Bernard, and more for Manny – which is probably a good sign for my own empathy. But the most remarkable aspect I noticed while re-watching the series this time was about Fran. 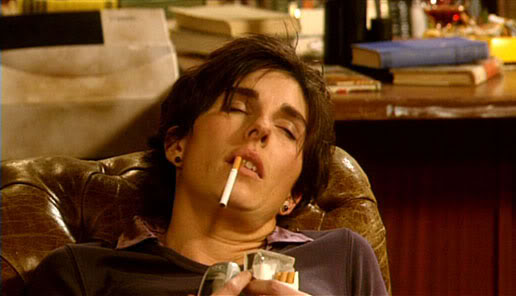 Fran is one of the most interesting women characters I’ve seen on television. Typically, women characters alongside male odd couples in television act as the voice of reason and the nag, existing only to temper the outrageous behaviour of her male counterparts — but this isn’t the case with Fran. Much of the humour from Black Books surrounds the alcohol consumption of the protagonists, and problematics of that aside, Fran is remarkably on an even playing field with Bernard, a master of excess. She is relatively kinder than Bernard (but it would be hard not to be), and though she defends Manny from Bernard time and again, she’s just as quick to manipulate him into doing what she wants. She’s unmotivated and has no real prospects, making her less successful, as the show continues, than the other two. Her physical characteristics are also unique among most women on TV. Tamsin Greig is a master of slapstick and physical comedy, and she’s not afraid to look ridiculous for laughs. Fran is constantly making silly facial expressions, passing out in unflattering positions, or embarrassing herself. All of these qualities make her rare among women characters on TV as it is.

But what stuck out to me more than anything during this rewatch was Fran’s sexuality. TV is full of women characters desperate for a relationship, chasing one disastrous partner after another. And while it’s entirely true that Fran’s relationships in Black Books are disastrous, it isn’t true that she’s desperately looking for a relationship. Fran is looking for sex. She’s completely in charge of her sexuality, and that’s never played for laughs or used to label her in any derogatory way. In the second episode, when she’s trying to figure out if she’s met Manny before, we see that she’s sexually active to a degree we’re much more used to seeing with men. She wonders aloud: “We haven’t slept together… and you’re not here to freak me out.” Manny says no, as if it’s a completely normal way to start a conversation, and Fran sighs, relieved, and says “It’s just that with you being a man and everything, I thought maybe we’d had sex.” In another episode she tells Bernard about how much she’s looking forward to her date with a divorced man, and explains that the reason is because he’s got a nice ass. She then asks Bernard if he’s ever been with anyone with a nice ass, a conversation usually reserved on TV for “the guys.” While her promiscuity and openness about it with strangers and friends alike are written into the scripts as jokes, the joke is never that Fran shouldn’t be like this because she’s a woman. Her male counterparts never point it out as if it’s strange because of her gender, and they never dissuade her from it. She’s on equal terms with any promiscuous man in any TV show, but she’s never demeaned for it.

On her date with the guy with the nice ass, who’s being perfectly civil and kind, she’s the one being lascivious toward him, pulling down her dress and exclaiming, awkwardly, “Would you look at these breasts!” The date doesn’t pan out (he’s gay and is only just realizing it), and Fran is alone again. However, she’s far from desperate to be with someone just to avoid being alone. My favourite example of Fran being a badass, sexually active woman is in the episode called “The Big Lock-Out,” with Peter Serafinowicz guest starring as the unusually deep-voiced Howell Granger.

Fran sees Howell in the bookshop and whispers to Bernard:

FRAN: It’s Howell. Howell Granger. I was at college with him.

FRAN: He confuses me. He– He’s a total arsehole. But he’s got this voice and it just does things to me.

At that point, Howell notices Fran, and calls her name in the voice that has her transfixed against her better judgment. He gives her his number and tells her that he’ll be reading the shipping forecast on Radio 4 that evening. Fran cancels plans with Bernard so she can be alone to listen to it. She takes the phone of the hook, pours herself some wine, and gets into bed, squealing in anticipation.

Then, when Howell starts to read the forecast (repeating “good” a number of times) she masturbates to his voice on the radio. Not only is this one of the only examples of a woman getting off alone that I can think of in a sitcom, but the imagery is not subtle. We see Fran with her hands under the covers close to her body.

In a reversal on the typical trope of a man creepily calling a woman and breathing heavily, Fran calls Howell just to hear him speak, but eventually has to reveal her identity when he threatens to hang up. He’s confused by the noises she’s making and worries she’s in distress, so he offers to come over, repeating “I’ll come,” which is what finally sends Fran over the edge. Fran reaches a screaming orgasm and Howell is completely ignorant to what’s happening, yelling “My god, what’s happened!?” Fran, completely back to normal, gives the ridiculous excuse that she got her foot stuck in the refrigerator and hangs up. She could have invited him over, but she has absolutely no interest in being with him physically – she’s using his voice like porn and wants nothing more to do with him once she’s reached her goal. After, we see her splayed on the bed, the sheets ripped from the mattress, while she collapses exhausted. This isn’t a pretty, tasteful, sanitized orgasm that most shows would have you believe is the proper feminine way of doing it. Even her moaning and screaming heard over the phone while Howell struggles to understand what’s going on aren’t meant to be pretty or alluring. She’s losing her mind, and she’s doing it selfishly.

Black Books never holds Fran’s sexuality up as some sort of oddity. Surrounded by weird, anti-social men, her sexual proclivities toward going for what she wants no matter what the cost are never pointed out as out of the ordinary. It’s implied that she masturbates regularly. Unlike other women characters in sitcoms, she doesn’t suffer from never having had an orgasm, or wishing she could find someone who wanted more than just sex. Bernard reveals that he’s seen her personal ad in the finale and makes fun of her for it because it says “30-something woman seeks solvent man for sex and possible friendship, sense of humour irrelevant,” but the humiliating aspect for Fran is that he’s seen that she’s taken out a personal ad — not that the personal ad is focused on sex only. Fran is definitely not a role model, but if one thing should be emulated, it’s that she is absolutely certain in her sexuality and puts her desire as a priority. And I’ll drink to that.