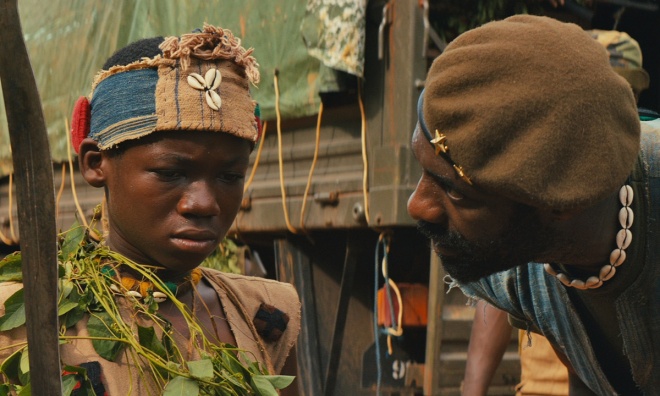 I tried recommending Beasts of No Nation to someone and I found myself struggling to explain why they should watch it. Knowing they have a penchant for action and entertainment, I ended up asking them, stupidly, “Do you ever watch movies that aren’t fun?” I got little more than a blank stare in return but damned if I still can’t come up with a better way to start the conversation. Beasts of No Nation is an incredible film, but is that enough reason to ask someone to invest over two hours of their day into a movie that is depressing, harrowing, and, in the end, only ambiguously hopeful?

My first temptation is to say “Of course! Everyone should see it so that we know what’s going on over there!” But that’s a knee-jerk reaction that doesn’t stand up well to scrutiny because to me, “over there” just means “Africa.” My (and, I would wager, most North Americans’) knowledge of the actual political and social realities of life in any part of Africa are hyper-generalized at best. To me, “over there” is all that Africa is and I (wrongly) assume that whatever concepts I have of “Africa” apply to the whole continent. So, when I see a movie like Beasts of No Nation and it fits snugly within my concept of a war-torn continent, it’s not respectful of any real conflict, region, or political struggle.

The movie itself is implicit in this “othering.” It doesn’t provide dates or geography, it keeps things vague, while still unquestionably African. I can only assume this is done for the sake of making the horror of the film more universal. So what does that mean for a North American audience? Even if the film gives us permission, by way of its vagueness, to focus on the emotional experience of watching the film instead of feeling compelled to “fix” a real part of Africa, the end result is a catharsis that’s sullied by guilt.

Beasts of No Nation feels unsafe. Its wars are unforgiving to civilians who are perpetually at risk of execution, rape, and anonymous eradication by way of a stray bullet. Even the active participants in the conflicts are generally exposed, with their unarmoured bodies running headlong into firefights, counting on bravado and prayer to help them survive. It’s a constant reminder to the audience how fragile the human body is. This discomfort is quickly balanced out with a feeling of relief and security that ‘thank God this isn’t me. Thank God I live here instead of over there.’ It’s a poignant piece of filmmaking that, however briefly, makes one appreciate the creature comforts of their own life and put away petty squabbles once they’re put in contrast with “real problems.”

Reality is Beasts of No Nations’ troubling grey area. If this piece is (and I don’t believe that it is) meant to represent a particular conflict in a specific country, then the movie fails to educate its audience on the specifics of its occurrence. The higher-level politics of the struggle are hidden from the audience, allowing the film to focus on the experience of being a soldier in the war. If, instead, the film is meant to represent the kinds of things that could be happening in troubled parts of Africa, then it becomes difficult to not see the work, because of its vagueness, as an implicit indictment of all of Africa, as a place where these tragic phenomena are allowed to happen. The film ultimately asks you to be grateful that you’re not African. Africa is “that place over there” where children are conscripted and trained to be murderers and rapists. The only way to truly be safe from the horrors of the movie is to just not be from there.

If the goal is catharsis, then a writer piecing together a story that covers all the bases of a worst-case scenario of lost childhood is a worthwhile enterprise. If the story is real, however, or even real-ish, the catharsis lurks into the realm of exploitation. If the source of the emotional experience is a commercialized product that shines a light on actual, current human suffering, it becomes a failed endeavour of decency and compassion.

I have hope for Beasts of No Nation. I hope (however naively) that it’s not real, both for the sake of the people who may have inspired the story, and also for myself to be able to enjoy the film with a clear conscience. I hope that it’s morally acceptable to have participated in the film, while having a selfish emotional experience. It’s beautifully shot, incredibly well-scored, and more than anything, I hope that my fears and doubts about the soul of the film are based in my own ignorance rather than anyone else’s reality.