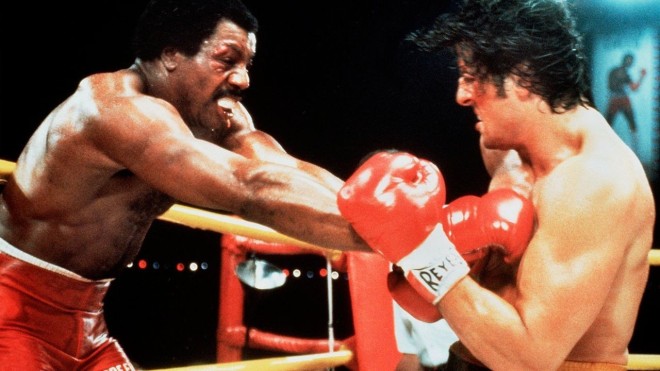 First of all, let’s talk about the zoo for a second. —SPOILERS— After getting out of the hospital, Rocky takes Adrian to the zoo, where he proposes in front of a tiger. It seems like an unconventional location for such a momentous occurrence but that’s always been Rocky’s style. What’s especially important about the zoo is that it’s mentioned in the first movie when an associate of Rocky gives him a suggestion about where to take Adrian on their first date. The exchange goes like this.

Associate: Hey Rock, I hear she’s retarded.
Rocky: She ain’t retarded. She’s shy.
Associate: Tell you what to do. Take her to the zoo. I hear retards like the zoo.

There are so many different ways to read Rocky’s choice to take Adrian to the zoo to propose. One is that it’s just an unfortunate coincidence, where Rocky just proposes on the spot and they happen to be at the zoo. This would seem to suggest a notable oversight on Sylvester Stallone’s part in writing his script, a notion I’m inclined to disagree with. Another less likely option is that Rocky is choosing to make a statement about intolerance and insensitivity toward people with intellectual disabilities and is using this moment to challenge his former associate’s ableism. My preferred theory is that the proposal is linked to the original zoo conversation but that the idea has been mutated in the fog of Rocky’s punch drunk mind. Instead of the zoo being an attack on Adrian’s intellectual ability, Rocky just recalls it as a nice idea he had one time that she might like the zoo.

Secondly, I talked a bit last time about Rocky‘s famous training montage and how influential it was. At the time, I didn’t realize that its biggest influence would be on its own sequel. —SPOILER— After Rocky gets Adrian’s consent to fight, he dives right into a montage sequence, where he is shown doing all manner of feats of boxing, agility, and strength. The only thing missing is the famous running that culminated the original movie’s sequence. The training montage ends with a final shot of Rocky punching a speed bag, along with the sounds of a final chord and a punching sound effect that sounds like a gunshot. For all intents and purposes, the sequence is finished and we now understand that Rocky is ready to go for his fight. We fade to a scene of Rocky holding his baby, the hairiest child that has ever lived. Not 30 seconds later, the theme from Rocky kicks in and we are treated to a second training montage! Rocky literally jumps onto the street and starts a sequence that is made up entirely of running, ending on the same steps as from the first movie. This time, Rocky is surrounded by hundreds of children, all screaming his name. I imagine it’s meant to show Rocky’s growth from an unsupported thug (as he was in Rocky) into a pillar of Philedelphian society, as he’s become in Rocky II, but instead it exemplifies the sequel’s willingness to exaggerate and explode successful tropes. When it works, it creates a more affective, heartfelt film. When it doesn’t, you get scenes so absurd they seem to be flirting with self-parody. But you don’t have to take my word for it…

The last thing I wanted to talk about was what Rocky II is trying to say about why —SPOILER… ah hell, I’m just going to stop warning you— Rocky ends up achieving his goal and winning his big rematch at the end of the movie. The first big factor is spousal support. When Rocky first decides to get back into the ring, it’s entirely against Adrian’s wishes. She reminds him that he promised he would stop and she continues to let him know that she doesn’t want to see him hurt or permanently damaged by continuing to make a living getting punched in the head. It’s a reasonable concern – one that eats away at Rocky to the point of him being unable to concentrate on his training. Rocky doesn’t go into full-fledged montage training mode until Adrian slips into and then wakes up from a coma, only to completely change her tune and decide that she wants to see Rocky live the life he wants to live.

Rocky II also introduces us to Apollo Creed’s domestic life. When we first see his family, his children are running around the house while he stews over hate mail stemming from his last encounter with Rocky. His frustrated wife suggests that he should spend time with his children instead of obsessing over a boxing match, to which he responds by throwing a hissy fit. Unlike Rocky and Adrian, we never see a reconciliation between Creed and his wife. The last time we them together, she’s sitting in his locker room, sporting a look on her face like she’d rather her husband be anywhere else.

She cheers him on with fervour during the match but, as far as the audience can tell, Rocky is armed with a ton more spousal support than his opponent. It’s clear that the movie celebrates a supportive family unit. And, if you find that you’re not getting the support you need at home, a good coma should sort her out.

The other factor that Rocky has in his favour, more insistently than ever before, is his faith. It never occured to me during Rocky to consider Rocky’s religion. In Rocky II, you have no choice but to notice. Rocky and Adrian get married in a traditional Italian ceremony in a big, beautiful church. He drives to see his priest right before his big fight in order to ask for a blessing. He wears a big cross around his neck. He spends every waking moment of Adrian’s coma in the hospital chapel whenever he isn’t at her bedside. Heck, check out the décor in her hospital room.

To cap it all off, Rocky’s speech after winning the title announces includes the line “Most of all, I want to thank God.” Compare that to Rocky, where the only thing he can scream about after his big fight is Adrian’s name. Rocky’s new, better success stems from the stability that he is able to glean from creating a strong domestic and spiritual foundation for his life. It’s a formula that’s hard to argue with. In creating a family, Rocky has other people for whom he is responsible, creating more urgency than ever before to succeed. He pairs that with an increase in a personal fortitude, created by exploring his faith. He used to think he was a bum but in finding the “love of God” or what have you, Rocky has more confidence than ever before. As far as life lessons go, a Hulk Hogan-esque mantra of getting your life together by taking care of house and heart and saying your prayers is the perfect way for a reborn, lovable lug like Rocky to thrive.

Be sure to check out reviews of the rest of the franchise: