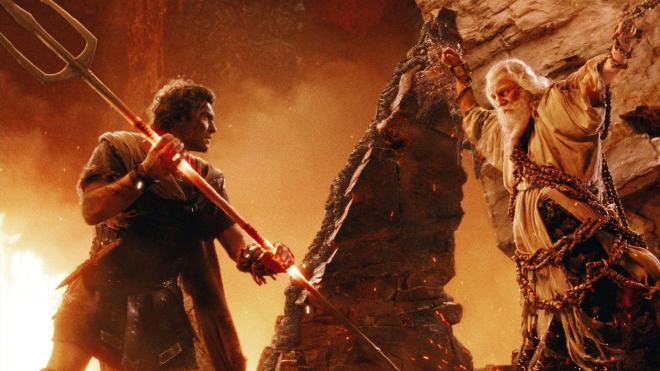 On this site, I try to stay away from knee-jerk aesthetic reactions to pop culture. Too often does the conversation when we see a movie dissolve into a simple yes or no proposition about whether or not it was good. I follow Rotten Tomatoes as much as the next guy but I love the idea of probing further into movies and discovering the personal and social truths that can be understood when art is put under scrutiny. Wrath Of the Titans is probably the hardest time I’ve had writing about a movie this year because my initial and ongoing instinct is to throw the mission statement of critical analysis out the window and make a list of all the things that make it so terrible. So maybe let’s do a bit of both.

One of my biggest concerns was with the final battle between Perseus and Ares. Up until this point, Ares has been shown to be an incredible fighter, trouncing all of his opponents, a dozen at a time. That’s what one would expect from the God of War. Earlier, it’s shown that even Perseus is clearly outmatched in one-on-one combat against Ares. Yet somehow, when the dust settles, Ares is the one getting shivved with a lightning stick and Perseus is able to fight another day.

Sure, pride played a hand in Ares’ undoing, as he turned his back on Perseus long enough to lose the advantage but come on! This is a God (cannot emphasize this word enough), who has been fighting, supporting, and endorsing battles for millennia. Apparently, across his entire existence as the very patron of conflict, Ares never learned to 1) Not walk away from someone who is trying to kill you, 2) Respond to the sound of your armed opponent getting up and running to a hiding place, 3) Defend against a really weak-looking chokehold. It’s bullshit. Bullshit, bullshit, bullshit. There’s just no way that Perseus wins that fight.

Speaking of bullshit altercations that Perseus has no business surviving, how in the ever loving crap does Perseus make it out of his battle with Kronos? For starters, Kronos is a giant (and when I say giant, I mean literally Titanic) man-shaped mishmash of rocks, lava, fire, and doom.  Secondly, Perseus goes into this battle, as he is wont to do, riding a Pegasus that, when flying, is still moving its legs like it’s running. Even without an aerodynamically compromised steed, anyone who has played the Aladdin video game knows that dodging lava is next to impossible.

It’s when Perseus flies Pegasus right up into Knonos’ mouth and down into his body that things get especially ri-goddamn-diculous. It’s an incredible coincidence that Pegasus, at full wingspan is just small enough to enter the mouth and, like the world’s largest ever game of Operation, never once touch the sides, which, let me remind you, are made of molten rock and lava. But fine, Pegasus is a champion flyer and they manage to maneuver to wherever it is that one hopes to land when fighting a Titan from within its digestive tract. That still doesn’t account for the fact that Perseus is inside of Kronos, shooting him with whatever the ancient Greek version of lasers are, when he succeeds and, within seconds, Kronos straight up explodes.

It don’t care how fancy Pegasus’s flying is; when you’re inside a giant lava monster and it explodes with you inside of it, you die.

I promised to spend a bit of time talking about what the movie is actually saying rather than just armchair critiquing its plot holes. The main theme that runs constantly through Wrath of the Titans is the importance of paternity. In this world, a male character’s actions and deeds do matter but they are always understood in relation to their father.

Starting at the bottom, all we know about Helius is that he is Perseus’ son. His purpose in the movie is to act as his father’s motivation to save the world. The last thing we hear said about him is that he is “son of Perseus, grandson of Zeus.” Moving up the tree, half-blood hero Perseus tries, at first, to avoid participating in any conflict but it doesn’t take long for him to realize that his lineage comes with a duty to fight monsters. Zeus’s favouritism toward Perseus results in jealousy from Ares, which leads Ares to form a coalition against Zeus but in support of Hades’ father, Kronos, Ares’ own grandpappy.

Morality and survival in Wrath of the Titans is determined by ones’ ability to toe the family line. Sons who betray their fathers die. Ares, Zeus, and Poseidon spend the entire movie in conflict with their respective fathers and none of them make it to the credits. Helius and Perseus do what they’re told, so they end up fine. Agenor rediscovers his father-bestowed responsibility and becomes a war hero. Hades ends up as a compromise of both. For the first two acts, Hades supports his father, conspiring to help Kronos break out of Titan-prison and just start wrecking everything but in the third act, he “redeems” himself by aligning with Zeus to attack Kronos. Hades’ initial loyalty is rewarded by survival but the battle drains him of all of his godly abilities, leaving him without powers or immortality.

It would seem that this is a world where absolutely anything is possible, any danger is surmountable, as long as you listen to daddy and support his agenda. It’s an interesting philosophy but it’s one that barely allows for any concept of free will. The only chance for survival is to look backward into the past and continue on with your paternal legacy. But wouldn’t that be a broken world, where Frasier becomes a police officer, Raylan Givens turns to a life of crime and Luke chooses the Dark Side, just for the chance to live to another day?

To top it all off, this entire way of life is dependent on the incredible fact that Kronos, whose monstrous size and fire-based composition we have talked about at length, is somehow genetically responsible for offspring that are 1/1000th of his size, possess powers completely unlike his own, and look absolutely nothing like him. So, I guess the lesson we’ve learned here is that success in life is based on supporting our fathers, at least until such a time as Maury jumps in with a DNA test to let us off the hook. Either that, or we just learned that it’s hard to learn something about life when you’re distracted by how nonsensical the lesson is.

For more insights like this, subscribe to our podcast: The NetFlakes Podcast, available on Soundcloud, iTunes, or whichever podcast app you use.

Wrath of the Titans is also available from Amazon.