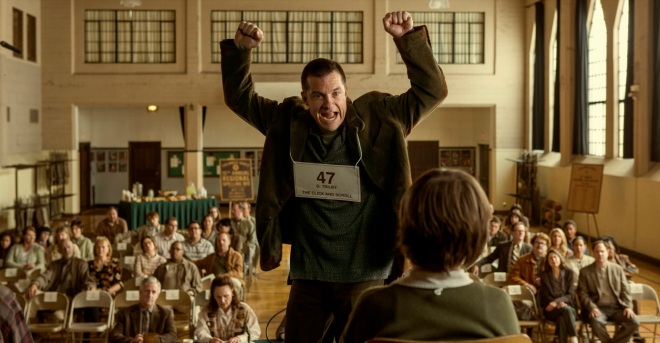 Bad Words tells the story of a 40-year-old man, Guy, who enters a children’s spelling bee. He resorts to underhanded tactics and sociopathically brutal insults to gain an advantage in the competition. As much as I appreciate Bad Words putting its thesis statement right there on the poster, I’m going to have to respectfully disagree. According to promotional materials, “The end justifies the mean.” Now I realize that the marketing team is playing pun with a common phrase but I would like to suggest that it’s not “the end” that “justifies the mean” but rather it is Guy’s genius and artistry with the English language that somehow allows us to forgive or even cheer his deplorable behaviour.

The main source of entertainment from Bad Words is in Guy’s ability to intertwine vulgarity with shrewd observations in order to tear down everyone around him. The cruel wordsmith trope is something we’re familiar with, as seen on the TV show Scrubs in the character Dr. Cox or R. Lee Ermey’s charcter from Full Metal Jacket. What makes Guy different is that he is not an individual in a position of authority who uses harsh language as a tool to strengthen his subordinates. Guy is using his calloused linguistic prowess to ruin children. It should be unwatchable to see a grown man cuss out kids so that he can win a spelling contest he has no right to compete in, but it’s done so skillfully that it’s still funny. It’s uncomfortable but it’s hilarious.

At first, I suspected that the ability to enjoy the torment of children stemmed from the ambiguity of Guy’s intentions. For the first three quarters of Bad Words, we have no idea what he’s up to. We know that there is some kind of motivation behind his behaviour but it’s not until the last act that we find out what it is. It stands to reason that as long as Guy’s mission is a mystery, his actions will be easier to swallow. We believe Guy when he says he has a good reason for doing what he does and so, until the revelation of his motivation, the narrative ambiguity allows for a suspension of moral judgment. This is a fine theory until the reveal actually happens. I won’t spoil the surprise but I will say that when you compare the selfish nature of Guy’s vendetta to the wake of childhood trauma he creates, the idea of forgiveness by way of ambiguity flies out the window. The problem is that even after the reveal, Guy still yells at kids and we still laugh.

So, an alternative possibility is that we’re able to suspend our empathy for the victims of Guy’s cruelty because they’re fictional characters in a movie about a competition about something as trivial as spelling. There isn’t much to back up this theory either. The kids are hard-working youngsters whose hobby already puts them on the outskirts of coolness. They have supportive parents who are passionate about encouraging their nerdy kids’ academic pursuits. So no, we don’t get pleasure from watching Bad Words because we want to see these children suffer. Once again, it comes back to the artistry of linguistic cruelty.

In both fiction and reality, there is an understanding that greatness, either in artistry or intellect earns one a wider berth when it comes to social decorum. Look at Sherlock Holmes. Smug and arrogant, Sherlock treats everyone around him with disdain. He considers himself to be above or incapable of any kind of politesse, preferring to treat his intellectual inferiors with contempt and condescension. Despite this anti-social behaviour, Sherlock is revered because of his incredible mental prowess. His genius forgives any social indiscretions.

In the real world, look no further than the prototypical genius, Albert Einstein. My knowledge of physics is laughably non-existent but I think it’s safe to say that Einstein was a pretty smart guy. By some accounts, he was also a relentless cheater and made some pretty outlandish demands of his first wife, concerning things like her domestic subservience and his desire to have her shut up the second he demanded it. But that’s not what we talk about when we discuss Einstein. Infidelity and domestic insensitivity are brushed off as trivial nonsense when cast in the shadow of genius.

Early on, a reporter discovers that Guy, before dropping out of the 8th grade, showed signs of genius-level intellect. His intelligence continues to shine in his success at the spelling bee. Competing against kids who have been training for years, Guy makes it to the finals effortlessly. It may sound unimpressive to beat children at spelling but let’s consider for a moment that for four years, Fox had a hit game show called Are You Smarter Than a 5th Grader based on the premise of adults being dumber than children. Besides, I don’t know too many people who can bust out a proper spelling of “antidisestablishmentarianism” at the drop of a hat. While it could certainly be put to better use, Guy prefers to channel his genius into the ability to use language to destroy anyone who gets in his way.

It’s incredible to think that a genius doesn’t even have to actualize his potential into anything of value in order for his indiscretions to be forgiven. The only reason we suspect that Guy may be special is because of his clever cruelty and yet we still enjoy watching him weave a tapestry of vulgarity and soul destruction. He’s an evil genius but the latter outweighs the former. Politeness and social protocol are just rules that exist to keep normal people in line. The further one pushes into excellence, the less these rules apply. The exceptional are exempt from considering the feelings of the mundane and anyone who disagrees can go fuck themselves.