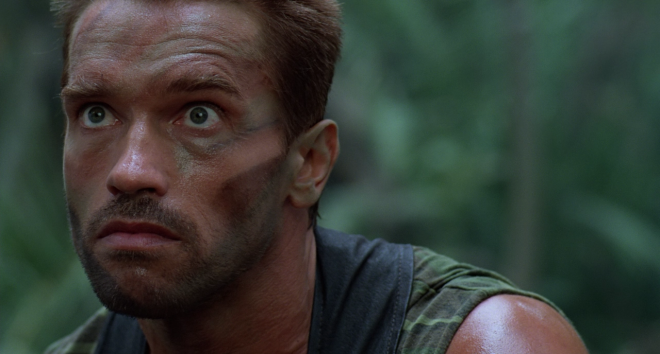 Normally, I’m that guy who’s sitting there during the movie pointing out the fallacies and illogical situations. It’s gotten a lot worse since July, when I started watching Mythbusters on Netflix, especially the ones where they debunk popular movie stunts (like the idea of a guy flying backward after getting shot). I’ve actually watched 63 episodes of the damned thing since July 8th, which puts me at an average of about one per day, so there has been a fair amount of rose paint stripped off of my glasses over the last two months. It wasn’t until today, however, that I realized that, in some cases, none of that stuff really matters.

Predator is absolutely riddled with that sort of nonsense. You’ve got guys flying out of windows after being shot with guns, you’ve got guys being set on fire from bullets, and you’ve even got a guy shielding himself from heat vision with a light shellacking of mud (an idea that was specifically addressed in a 4th season episode of Mythbusters called “Crimes and Myth-demeanors”) but all of the absurdity doesn’t make it a bad movie. Don’t get me wrong, it’s not like they’re using these tropes ironically in order to generate a laugh. They’re still ridiculous ideas but they are not what the movie is about.

The movie is about humanity. If you go back to the top of this review, you’ll notice that I didn’t use a picture of the Predator creature, even though that’s all that Google Images seemed to want me to find. Sure, it’s a spectacular villain and those jaws are the stuff nightmares are made out of (kudos to James Cameron for that suggestion) but it is only terrifying so that the triumph of humanity can seem that much more impressive.

The best scene in the whole movie comes early on, when a soldier is killed by the creature. It’s an important death because, despite Arnold’s presence, this other guy seems like he is supposed to represent the muscle. He’s a huge dude, chewing on tobacco like mouth cancer ain’t nothin’ but a thing, and he carries a piece of weaponry that is rarely attached to anything but a helicopter. So when the Predator decides it’s his time to go, you know that any fans in the area are about to get a defecation make-over. It’s not the death itself that makes for the great scene, it’s his buddy’s reaction to it.

One of the other soldiers has something of an emotional break when his friend dies. He ends up going off, balls out and guns a-blazing. But, before sliding off the brave/stupid scale, he honours his friend by sharing a last drink and returning his friend’s flask to his lifeless body. It’s quite touching, and it really strikes home that these are not just cartoon characters blasting away at each other for the sake of blasting away at each other. These are people, under a threat so real that despite years of regimentation and training, they are still emboldened and terrified enough to throw rank and standard operating procedure out the window in order to just kill the fuck out of whatever is hunting them.

While this may have been the outright best scene, the film’s most evocative and microcosmic image comes near the end when Dutch (Arnold Schwarzenegger) realizes that it’s just down to him and the creature. After a bit of Home Alone-style trap-building ingenuity, he stands on a cliff, holds up a torch and bellows for the Predator to come get some. It’s just a dude, standing there, stripped of any support, hope, and high-powered weaponry, facing a stronger, faster, more technologically advanced enemy, and still he drips with confidence and primal, human spirit. At that moment, we know that he’s going to win. It doesn’t matter that it only happens because of the Predator’s prideful decision to fight hand-to-hand or because of an amazing series of coincidences. The movie looks at humanity, notices that it’s pretty fucked up (and even punishes its people for showing too much tenderness – that soldier I mentioned earlier gets his head blown oh so very away) but still says that that doesn’t mean we’re going to roll over and become some better species’ target practice.

I have no idea if this celebration of humanity has any practical use. The movie doesn’t ever really give us a reason why Dutch deserves to win, nonetheless, it feels really good to see. Predator may not be a worthy apology for the human race but it suggests that when it comes to the big “Why are we here?” question, an acceptable answer may just be “because I fucking said so.”