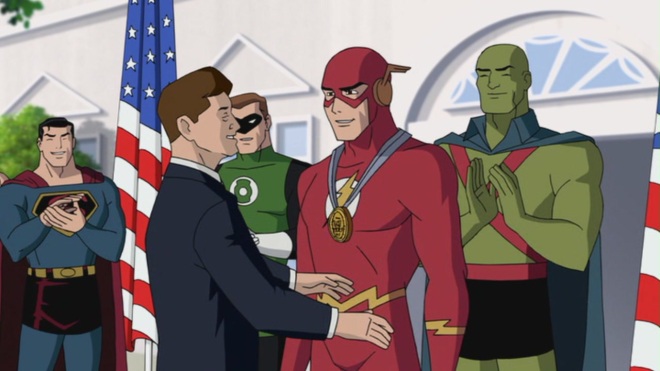 A little while back I wrote about a movie called Ultimate Avengers, where I talked about how much better DC’s animated movies tend to be. Then came Justice League: The New Frontier, which proved, unequivocally, what I have known for years: that I am always right.

JLNF took the concept of the mess that was Ultimate Avengers and dared to make it good. The story centers on a dangerous entity called The Centre (Keith David), which has, apparently, been kicking around on Earth since before the age of personkind. The Centre’s increased activity and desire to eradicate humanity from the planet takes many different forms, leading many of America’s superheroes to have similar experiences with the malevolent force, eventually prompting them to join together to defeat it.

Granted, this union sometimes feels like mindless American patriotism (like when Superman gives a rallying speech, prompting everyone to drop their, until then, very crucial ideological differences), but it also provides a good reason to have a fairly epic battle wherein most of DC’s biggest names duke it out with a giant floating thing that vomits out laser lights and dinosaurs.

The movie’s characterization is rich-ish. By the nature of this kind of movie (with a bajillion superheroes), it would be nearly impossible to tell a really fulfilling story about just one character. But, in JLNF, we get enough from enough heroes to tantalize us to want to know more. The story plays a safe bet in assuming that we already know enough about the big two (Batman and Superman) and instead focuses on lesser-recognized figures like the Martian Manhunter and The Green Lantern. By allowing the big names to play supporting roles, we get a couple of lesser familiar origins stories without wholly depriving the audience of faces that brought them in.

There’s a lot to be said about the voice casting of this movie. David Boreanaz plays the arguable lead as The Green Lantern, a character whose depiction is about as serious you can get without compromising cartoony fun. Lucy Lawless, in a how-has-nobody-thought-about-this-before role plays Wonder Woman. Then there’s Jeremy Sisto who you know from either Six Feet Under or Law & Order or else not at all. He provides the voice for Batman in a jarringly different style than anyone else I’ve heard before. Without ever seeing a strictly Bruce Wayne side, we only get a dark, brooding, Rorschach-y Batman, for which Sisto’s voice is a great match.

Justice League: The New Frontier isn’t perfect, but it’s a redeeming piece when other, lesser (looking at you, Marvel) comic book cartoons are being made. It’s intriguing, dark, and overall good enough to make up for its flaws.