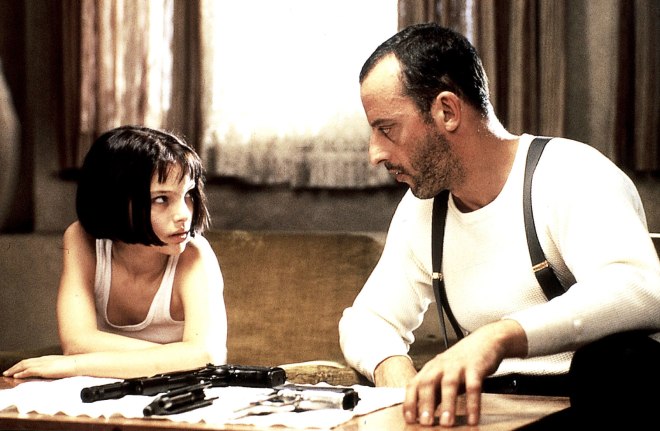 Léon is the most uncomfortable buddy picture I have ever seen. On one side, we have Léon (Jean Reno), a contract killer whose brutality and effectiveness stands in sharp contrast to his simple-minded nature. On the other is Mathilda (Natalie Portman, in her feature film début), a young (and we’ll get back to that later) girl, out for revenge after her family is murdered by corrupt DEA agents. Reluctantly, Léon takes Mathilda into his care, and eventually, under his wing, teaching her the basics of his profession.

Stylistically, the film does action incredibly well. In the opening act, we barely see Léon as he acts out a contract, dispatching of foes in increasingly elaborate and choreographed ways, nearly to the point of parody. In fact, I was starting to think that this movie might end up being a kind of James Bond satire. Regardless, once the bullets start flying, the violence stays fresh and varied enough to keep you fixed to the screen.

Another big success of the film is its characterizations. The title character, Léon is a not-so-complex mixture of traits. He’s fiercely loyal to the few things he cares about (namely his houseplant and Mathilda), but culturally- and interpersonally-challenged. He doesn’t recognize staples of American cinema (except Gene Kelly, for whom he seems to have some kind of deep appreciation), and never suspects his boss, who is “holding onto his money for him” of any kind of misdealings. Every so often he surprises us with a willingness and aptitude for interacting with Mathilda. Whether it’s due to her forcing him to interact, or more of a natural ability to deal with children is unclear, but it makes for some endearing, if not entirely logically justifiable scenes.

Mathilda is that kind of child character that is far too precious, clever, and world-weary to be believable. Considering the life she has been handed, it’s understandable that she would have a certain bitterness toward everything, but her actions, manner of speech, and sense of humour are distrangingly far beyond the scope of most (if any) 12-year-olds. Despite her absurdity, Mathilda isn’t just a sidekick to Léon. She is a fully-weighted character, whose struggles bring her face-to-face with the film’s villain.

Which brings us to Norman “Stan” Stansfield, one of the previously mentioned corrupt DEA Agents. This character, among the rest of Gary Oldman’s repertoire, continues to show how much of a chameleon this guy is. It’s hard to tell whether Stan is supposed to be a satire of badguydom, or just a really quirky bad guy, but with either direction, Oldman’s performance anticipates roles like Heath Ledger’s Joker in terms of its tick-laden, erratic villainy.

Now we get to the elephant in the room, and the reason I called it “the most uncomfortable buddy picture.” Despite the obvious age difference between the characters, there isn’t not any sexual tension present. Mathilda’s insistence that she is falling in love with Léon can be understood as a child’s first foray into sexual development, which I can accept as being healthy. Superificially, he has taken good care of her, and is a cool, attractive person. Lines are nearly certainly crossed however, when the two share a bed or when, in playing a celebrity guessing game, Mathilda, goes for all-out sexy while imitating Madonna and Marilyn Monroe. Then, of course, there’s the question of whether or not it’s appropriate for a 12-year-old to be learning the skills required to assassinate people. It’s interesting to note that I’m more comfortable with the latter, even though I’m more set in my beliefs against murder than I am confident of at which point sexual attraction becomes mutual. Regardless, it’s a challenging thing to watch, that, largely thanks to Léon’s simplicity, never progresses beyond Mathilda’s own yearnings. The line of questionability is being straddled, and unfortunately, it’s a 12-year-old girl who’s doing the straddling.