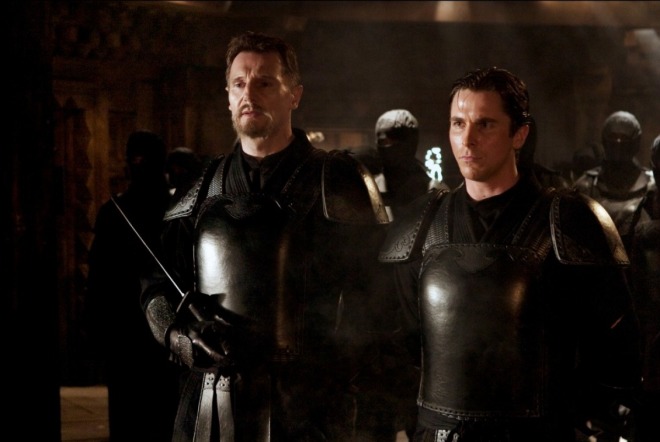 For the first hour, Batman Begins brings a credibility and intimacy that was previously unheard of in comic book movies. Unlike previous attempts, this film is devoted to uncovering and explaining exactly what could possibly drive a man to dress up like a bat and fight crime. The best thing that Batman Begins does is to make you believe that a person could and would actually do what Bruce Wayne (Christian Bale) does. Once the Batman persona is adopted, however, things start to derail a bit (pun intended… although you have to see the movie to get it), and the movie loses a bit of its credibility. Once you get into the territory of zip-lining onto moving trains, the believability zips away right along with you.

Along the same track (more train puns!), the movie also eliminates a lot of the supernatural elements of the characters it introduces, particularly Ra’s Al Ghul. Rather than have him be a seemingly immortal being with a penchant for environmentalism, Ra’s is part of an organization dedicated to eradicating corrupt societies. You can appreciate his ideas, but just not his methods. The earlier portions of the film touch on the regular criminal element: gangsters. Carmine Falcone (Tom Wilkinson) is one of the mobster elite, who essentially holds Gotham City in the palm of his hand. The fearlessness that he shows when opposed, and the complacency in which he holds the justice system showcase the true courage it takes for Bruce and his childhood friend, Rachel Dawes (Katie Holmes) to take him on.

Also of note is Michael Caine’s portrayal as Alfred. After his parents are murdered, Bruce is left without a family. Alfred takes on a surrogate father role, demonstrating support, respect, and concern for his charge/friend/son. Caine presents Alfred as a compassionate man who has nonetheless experienced enough personal loss to not bother with half-truths or sugarcoating. Batman simply could not exist without Alfred, particularly an Alfred as lovable and wonderful as this one.

Even when the film does dip a little too far into comicbookdom, it still isn’t bad. The action sequences are enjoyable, and the climactic crash is unquestionably cool. Still, its initial and lasting success lies in the scenes that give the most respect to the human element of the story. We love to see him train, we love to see him suit up, but more than Batman, Bruce Wayne is the one we want to see.