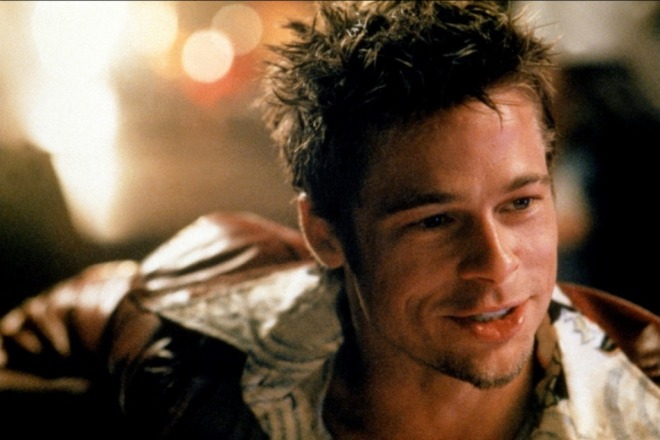 I love Fight Club. Up until my most recent viewing, I couldn’t figure out why other people wouldn’t. Now, after my fifth or sixth time, I think I understand why I love it, why I shouldn’t, and why many people don’t.

Off the hop, there are some things about this movie that are undeniable. Firstly, it is incredibly acted. Brad Pitt’s Tyler Durden is one of the best characters in movie history. He is, just like for the Narrator, everything that you want to be: confident, attractive, fit, carefree, intelligent… and the list of adjectives goes on while my self esteem plummets.

Second undeniable fact, the script is brilliant. The things that come out of these characters’ mouths are the kind of clever that a thousand Dialbo Codys sitting at a thousand Macbooks for a thousand years could never write. All of this incredible dialogue is then packed into an two-and-a-half-hours-that-doesn’t-feel-anywhere-near-that-long story that gets major points for originality, plot twists, and intensity.

Indisputable Fight Club fact #3: . While the jury is still, in many cases, out on whether or not the violence in this film is justified by its story or whether it is simply gratuitous, there is no denying that it is brutal. It’s also real in a way that is incredibly troubling to watch. The fights, especially, feel sincere, watching fist fracture bone, and face give way to concrete. No one is trying to make these fights pretty, resulting in very effective, disturbing, and poetic images.

This last part is where critics, and myself, start to feel divisive. Part of why I love this movie is because it is about modern masculinity. Tyler Durden looks at what men (and I mean that in the penis-toting sense, not the general, speaking for everyone sense) have become in modern society and decides to get back in touch with his hunter-gatherer man-ness by getting into fights. His line “What can you really know about yourself if you’ve never been in a fight?” feels like a genuine inquiry in a world where so few jobs (and identities) are linked to our physical bodies. Tyler Durden would have kicked the crap out of Descartes. The average modern man is a far cry from traits that feel inherently masculine. This is why many men, myself included, feel the draw of athletic competition. Sports, especially ones like boxing or MMA, provide a glimpse into the kind of violent, self-assurance that has been repressed within modern masculinity. Durden provides an outlet for those feelings and enables a kind of self-actualization based on understanding physical limitations. Up until this point, I am totally on board with Fight Club. I cannot speak for women but I honestly believe that there is an inherent violence within masculinity and that its occasional release through a consensual fist fight is neither unreasonable, nor unhealthy. I do not think a real world Fight Club would, in and of itself, be a bad idea, as long as proper regulations were followed.

Then, we turn to Project Mayhem. I can support getting into a fight. I cannot, however, endorse urban terrorism, especially hypocritical urban terrorism that is funded by the very sources that the terrorists are trying to destroy. I really don’t think that anyone is supposed to think that Project Mayhem is a good idea. There are issues, however, with how it is portrayed in the movie. Project Mayhem has, in my opinion, good intentions. It is based on a struggle against consumerism, which many people believe to be, for all intents and purposes, evil. Many of us “work jobs that we hate to buy shit that we don’t need.” Project Mayhem is trying to change that. Fight Club does an incredible job of getting us onto its side ideologically, but then leaves us in a gray area when its characters cross a line in acting it out. A perfect example is when Tyler Durden holds a gun to Raymond K. Hessel’s head for the purpose of forcing him, through terror, to live the life that he wants. I cannot condone Tyler’s actions, but I can certainly see the value, and beauty, of stirring people out of complacency.

So how much are we supposed to go along with what we see? UFC fighter Forrest Griffin, in his autobiography/how-to book Got Fight?, claims that Fight Club is one of his favourite movies, but that at first, he didn’t get it. He says that he felt compelled to sell all of his stuff in order to live more simply. I, as well, suppose that I “didn’t get it” because I find myself too sympathetic to Tyler Durden. I can see a certain amount of cowardice in the Narrator, in his inability to completely invest to an ideology that he, himself, invents. That doesn’t mean that I’m planning on shaving any monkeys or blowing up any credit card companies, only that it is unclear where to draw the line.

For me, the line comes when I start to feel like Tyler goes bad. Intellectually, I’m pretty much with Tyler the whole way. He is careful to ensure a minimal cost of human life in creating what he believes to be a better world. Nonetheless, his actions feel wrong to me, just like they do for the Narrator. Leaving this distinction up to feeling, however, is where the movie gets dangerous.

There have been several reports since the movie was released of fight clubs opening (atta-boy) but also of people planting bombs, styled after Project Mayhem (bad). But, I can certainly see how, presented with the same movie I was, somebody could feel completely endorsed in their actions. The film presents muddy, murky ideas, with no absolutely clear guide of how to interpret them. The Narrator’s action at the end certainly suggest a rejection of Tyler’s influence, but that could simply be because of an acceptance of those traits within himself.

Moral implications aside, even if I’m not exactly sure what Fight Club is doing, I’m sure that it’s doing it well.

One thought on “Fight Club”